US Youth Soccer announces new USYS League Championship which positions our league, the CCL NE as the only New England-based league with this pathway opportunity.  Click here to learn more.

US Youth Soccer is pleased to announce the League Championship (LC) program which provides an additional pathway for teams and clubs to advance to the US Youth Soccer Eastern Regional Championships. This new US Youth Soccer program has been designed with a focus on player and club development with input from the respective leagues.

The leagues will provide high level, standardized competition with the prospect of representing US Youth Soccer and your region at the highest level. Member leagues participating in the LC must apply and meet significant minimum standards and will have the opportunity for their top finishing teams from their top division to compete against the other participating league’s top finishers to earn a place in the US Youth Soccer Eastern Regional Championships.

After extensive research into standards and structure Club Champions League New England, National Capital Soccer League, Long Island Junior Soccer League and Club Champions League in Maryland and Virginia were chosen for the pilot program on the East Coast. The LC program will be managed by a committee consisting of US Youth Soccer employees, Member State Associations and league leadership.

CCL New England is the only league in the New England region with this opportunity for League Champions Play and will work alongside Massachusetts Youth Soccer, New Hampshire Youth Soccer and Soccer Rhode Island Soccer Associations to provide this regional and national pathway for players and clubs. 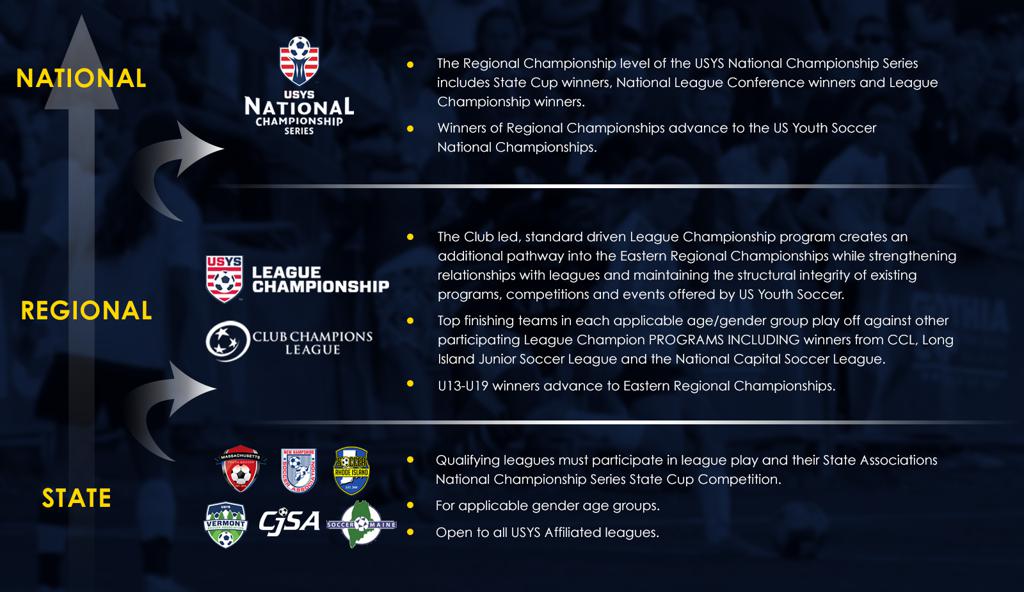