The Benfica Experience of a Lifetime

A number of Legacy Soccer Club players, families, and coaches journeyed to Lisbon, Portugal for a week-long intensive experience to last a lifetime.  Click here to read more and see images from the trip.

The Legacy Soccer Club and SL Benfica journey began back in the Summer of 2019 with the planning phase by Legacy Soccer Club’s John Barata and Benfica Youth Academy. The vision was clear, to provide an amazing training opportunity at the worlds best youth training academy. The coordination to make this first ever trip to Portugal an experience our players would never forget was of upmost importance and February school vacation of 2020 was locked in.

As the travel date got closer, the excitement grew. The time had finally arrived for the Legacy players to start their journey across the pond. Players and families arrived at the airport on February 14, 2020 with passports in hand and ready to go. Bags were checked, TSA screening complete and everyone gathered at the gate.

“Portugal here we come” until we hear over the intercom, “there is an issue with the flight so its cancelled, make your way out back to the ticket counter”. It was the Logan Airport marathon with 300 angry Portuguese individuals running back to the ticket counter.  After 90 minutes of waiting in the ticket counter line another announcement was made, “We have done all we can for the night, go home and someone will call you tomorrow”. This was not what the 19 individuals in our traveling party wanted to hear as our Legacy players needed to start training on Monday.

Some families went home while some went to a local hotel. The phone marathon was on for Legacy’s John Barata, trying to deal with the airlines main office in Portugal with a 6-hour time zone difference. None the less, John was able to make it happen for the next day but with a very narrow window for everyone to get on a bus and make their way to JFK Airport in New York.  The traveling party was split into two different fights, both leaving JFK 30 minutes apart and flying to Lisbon via Madrid, Spain. Yes, the Benfica experience took us through Spain as well. 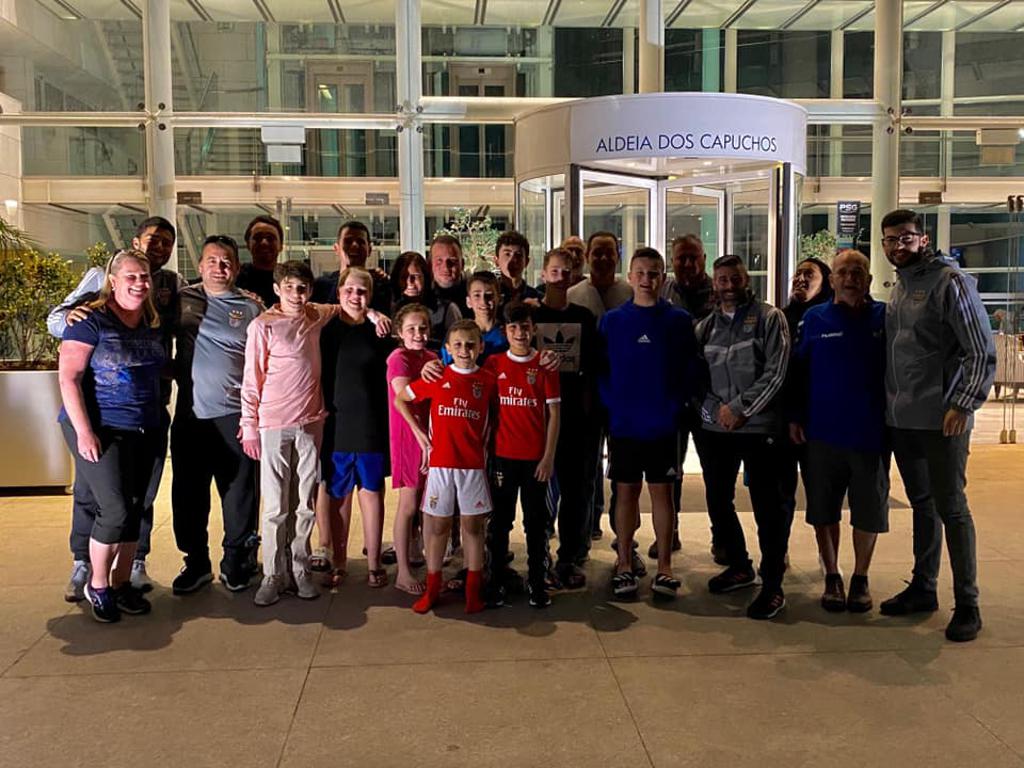 After starting our journey on Friday night, February 14, we finally made it to Lisbon on Sunday afternoon, February 16. We were picked up at the airport by our Benfica experience liaisons and taken right to an amazing SL Benfica B team game at the training complex stadium. It was an amazing high paced game with a great outcome for SL Benfica. Following the game, our Benfica liaisons gave the families and players a tour of the complex which left many in amazement due to its size and level of commitment to football.  After our tour, we where shuttled to our 4-star hotel were all the players were getting their second wind. Many of them did not know what jet lag was but they would soon find out.

Jet lag had set in and the players put their best faces on for breakfast. After getting ready, the players and coaches assembled in the lobby waiting for the shuttle to take them to the SL Benfica Training Complex. As tired as the players were, they quickly perked up with the sight of one of the SL Benfica team buses rounding the corner pulling into the hotel parking lot. Wow - what a sight and privilege to ride in style like a Benfica player. The players quickly took their photo ops and loaded the bus. The boys discovered the bus had 2 expresso machines, fridges, televisions and 3 Play stations. It was unreal! The Benfica crest was embossed on each and every seat. The passion and love of the SL Benfica brand was evident as cars honked as they saw the bus going by on the way to the training academy.

Once at the training academy, our Benfica experience liaisons treated our players like professionals. They were given their own locker room and brand-new SL Benfica uniforms to change into. The players were taken to the first training session with Coach Andre where they worked hard for a 90-minute session on a beautiful turf field overlooking the water. Following the training session they got to unwind for a little bit before lunch. The academy cafeteria was specifically designed for a balanced meal allowing the players to pick a protein, a starch, and a carb. What an amazing setup for a training complex.

Following a small break after lunch, the players began the second 90-minute training session with Coach Andre. At the end of each session, our assigned physiotherapist worked with our players for cool down stretching. Players then changed out of their uniforms like professional players and those uniforms were sent to the training complex laundry to be ready for the following days training. 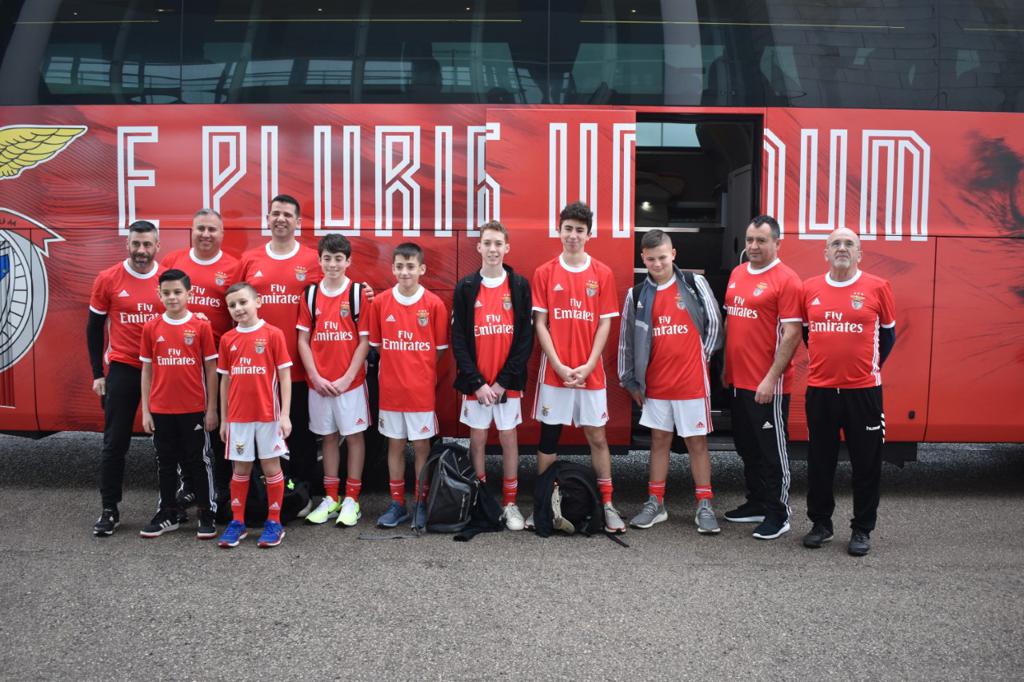 Day 2 of training was off to a better start after a restful night.  Jet lag was still in our systems but adjusting to the new time zone was getting easier. The Team Bus picked up our players and coaches again. Upon arriving at the training complex, the players were again assigned their own locker room and their laundered uniforms were passes out. Another high intensity 90-mimute training session was conducted. Following training, the players participate in a chalk talk in order to prepare a plan for their first match that evening against Seixal 1925 Club. The players then returned to the hotel to rest.

That evening, the players were driven in style to their first game on the Benfica bus which is a very intimidating site for an opposing team. Our players dressed onsite like the pros and walked onto the pitch like professionals in their red Benfica uniforms. The boys played well against opposing players that live and breathe Football. They finished the game with their first positive outcome.

As the players start getting into a rhythm, the team bus picked up our players and coaches again. Once at the training complex they began their daily routine of changing into their uniforms and heading out onto the pitch. Another high intensity 90-mimute training session was conducted following by another chalk talk about the previous evenings game and to prepare a plan for their second match that evening against Atlantico Escola de Futbol. 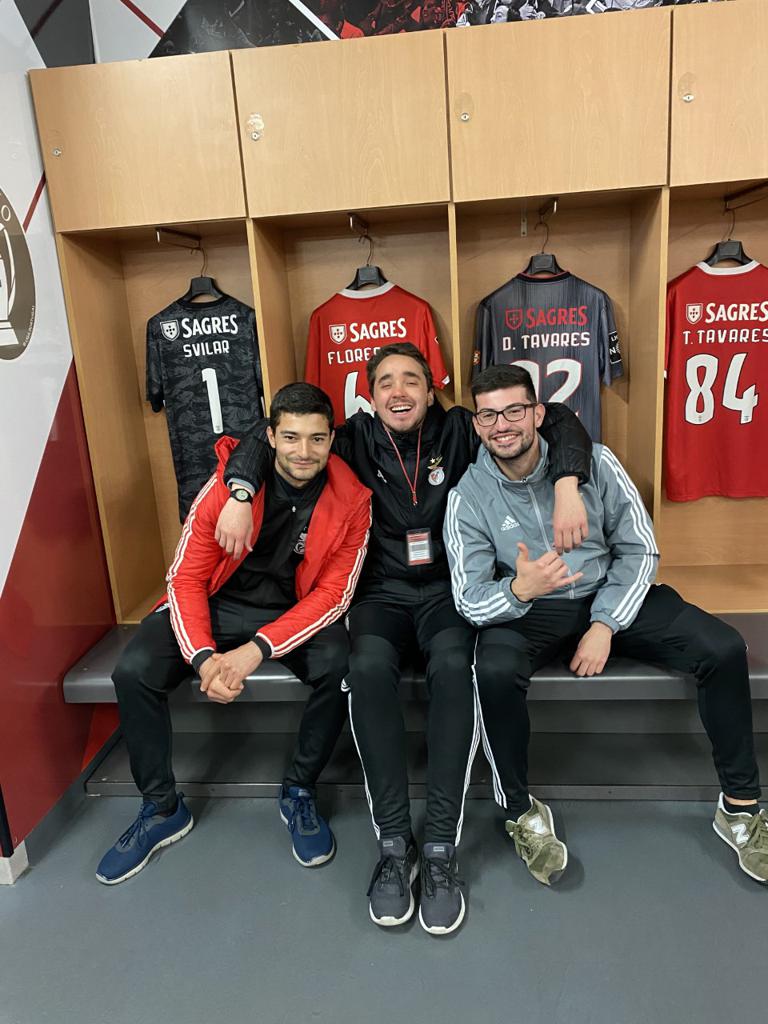 After leaving the training complex a little earlier, the players met up with there parents and the hotel and everyone boarded the Benfica bus and headed over the SL Benfica stadium for a full behind the scenes tour. Once at the stadium, the players and family were treated like royalty and given the tour of a lifetime to include meeting two of the SL Benfica mascots which are American Bald Eagles. The tour was followed by the SL Benfica museum visit and ended in their fan mega store.

That evening, the players were driven in style again to their second game on the Benfica bus. The players did well again against a tougher team. They were able to play hard and end in a draw.  A very well-matched back and forth game. Their skilled acquired at the training complex were started to shine through.

The day started like the others. The players were set into their training routine. Our Benfica bus arrived and shuttled us over to the training complex. Upon arriving at the training complex, the players were again assigned their own locker room and their laundered uniforms were passes out. Coach Andre cranked up the intensity and this 90-minute session was one of their best. A chalk talk flowed about the previous evenings game and to prepare a plan for their second match that evening against Amoro.

The players had a later evening game, so they had a chance to eat a healthy meal early. This evening was our last game against other local clubs, the players were driven once again in style to their third game on the Benfica bus.  This last game was their toughest to date. The opposing players were one of the local clubs’ best teams.  Our players came out to a slow 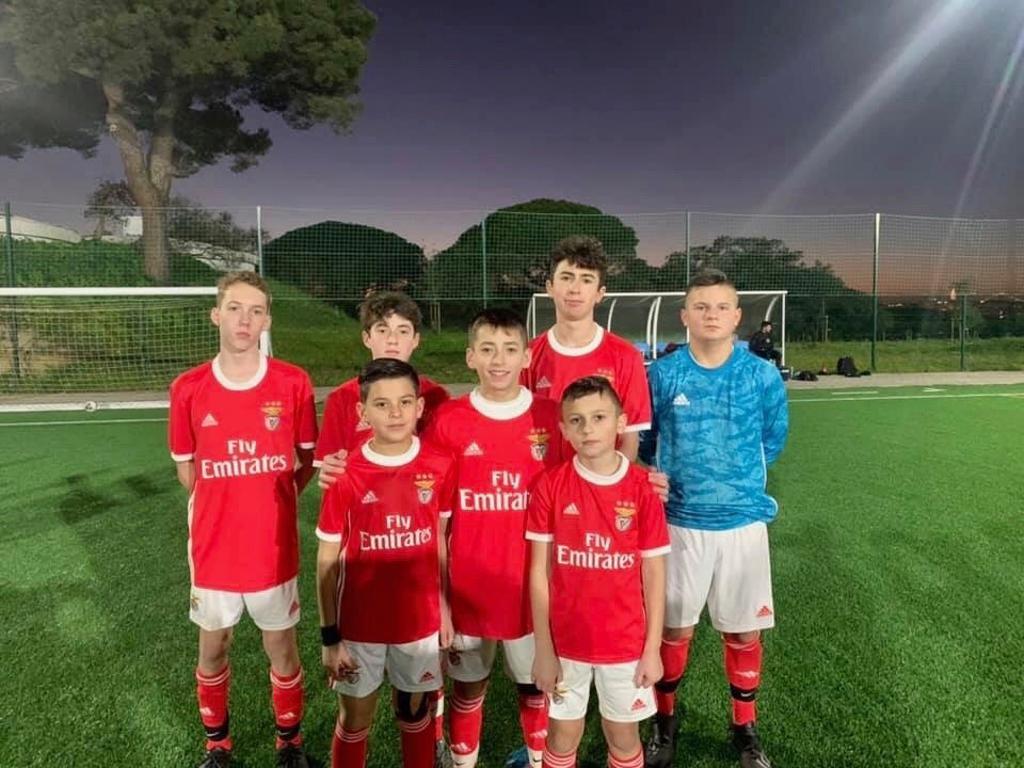 start but rallied back in the second half. Using their new skills, they had learned during the week, they kicked it into overdrive and came out in a draw.  The best playing and game to date.

As the players arose, they quickly realized that today was their last day of training. The week had flown by and it was now Friday. Like each morning, the Benfica bus picked up the players and coaches.  Already in their daily routine, upon arriving at the training complex, the players were again assigned their own locker room and their laundered uniforms were passes out. Today’s final 90-miunte training session was a week in review of everything combined. The players showed off their new skills in combination with other skills.

Following there training session they got to unwind for a little bit before lunch. The academy cafeteria as always did not disappoint. The players got to pick a protein, a starch, and a carb which they would need for there player vs coach after lunch scrimmage.  The scrimmage was a great way for the players to compete against their Benfica and Legacy coaches and unwind after an intense week of training. The day ended with a training graduation ceremony with the Benfica coaches, Benfica Experience Liaisons and Youth Academy Directors. The day really ended with the players boarding the Benfica bus one last time for a ride back to the hotel. Such a somber moment but also an excitement to come back again next year. 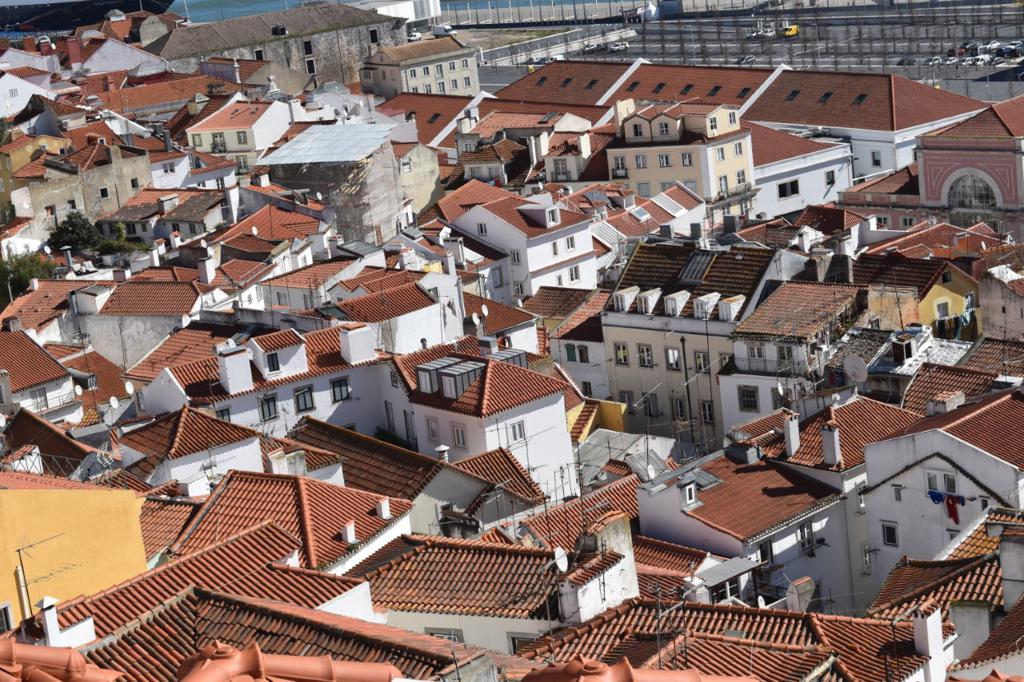 After a week of intense training and games, the players and coaches enjoyed sleeping in that big extra hour. Every family ventured out into Portugal for a great day of culture and new experiences. Each family’s day was different between visiting castles, monasteries, City of Lisbon and enjoying local cuisine.

Our last day in Portugal was started with a morning breakfast and to go box lunch. Families checked out and boarded the airport shuttle hoping the flight out would be uneventful unlike the flight over. All went smooth from check in, security screening and making it to the game. Soon we were boarded and on our way home thinking of when we could return for another week of training. See you next year Portugal and Benfica…