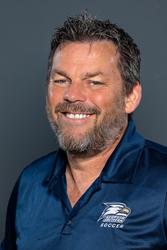 We were joined this Celebrity Monday by President and CEO John Barata's mentor, coach and good friend of many years, John Murphy. Coach Murphy shared stories of his New England soccer roots and soccer experiences with our Legacy family.

Coach Murphy has years of experience in the soccer world both as a player and a coach. The game of soccer has blessed him with the opportunity to travel the world as a coach at both at a professional and collegiate levels. He is currently the head coach of the Georgia Southern men’s soccer program and boasts a long list of team’s in which he has been a part of including the New England Revolution and Colorado Rapids of the MLS as well as Clemson and Brown University.

During his webinar with Legacy families, Coach Murphy couldn't emphasize enough the need for our youth to remain humble along the journey towards their goals and be grateful to all those that have helped them along the way, from parents to coaches and teachers. He also gave us a little bit of an insight into the players on which he has had the honor of coaching with big names such as Clint Dempsey and many more come through not only his coaching but his recruitment classes in which he became renowned for.

Coach Murphy spoke to our club about his experience in the Scottish Premier League as the Head Coach of Livingston FC. He said he adjusted well and fit right in due to his Scottish heritage and loved the passion that the Scottish people brought to the game as they lived, ate, and slept football (soccer). Coach Murphy then encouraged our players to have fun, grow a passion and love for the game while leaving enough time and space in their lives to enjoy being a kid.

We want to thank Coach Murphy for taking time out of his schedule to answer our players’ and coaches’ questions and we wish him all the very best for the upcoming NCAA season at Georgia Southern.