Former Oliver Ames high school stars Keegan Nutt (Stonehill College) and Chris Romero (Assumption College) visited with  Legacy players for a live Q&A session on May 11th.  Click to learn more about what Keegan and Chris shared with us! 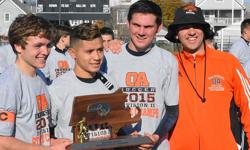 Chris and Keegan (center) with Coach Barata as 2015 Champions

This week's celebrity Monday saw our club welcome two former Oliver Ames High School men's soccer legends, Chris Romero and Keegan Nutt. - both part of the 2015 State Championship winning side that only the year before lost in the finals and made it their goal to not feel that pain again in 2015

Both Chris and Keegan Nutt have continued their passion for the game at the next level. Chris , currently a red shirt senior at Assumption College, saw his team win their schools first title in program history this year. Keegan, a recent graduate of the Stonehill College men's soccer team, was voted his team's MVP, All Conference Second Team in 2019-2020.

These two local legends could not emphasize enough the impact their role models played on their soccer development as well as the impact on their lives off the field. Both Chris and Keegan spoke of Coach John Barata having a major impact on them as players and how he grew their love for the game and for being part of a team. The ability to bring people with a common goal together and become a family is what really stood out for them, citing their championship winning run in 2015 as one of their greatest moments this far in their soccer careers.

Keegan also spoke of his need to be versatile in which position he played, having come from a championship winning program in high school playing in the center of the midfield, to having to adapt to left defense in college. He continued to emphasize this importance of being flexible and open to trying new positions and that the higher the level of soccer, the more need for a versatile player there is.  Chris echoed Keegan's emphasis on flexibility and it was clear that their hard work, the pride they have in their game and history playing together has helped feed their success on and off the field.

Please join us as we wish Keegan well with his pursuit on soccer at the next level, and Chris with his return to Assumption College for a final year of play as a graduate student.